This morning I spent two hours with Haven at the Child Development Center. Our journey toward getting an official diagnosis for our sweet girl has begun.

The first appointment was so insightful. There is SO much that needs to be taken into consideration in order to come up with an accurate diagnosis. I had no idea. We are dealing with so many factors that could have contributed to the extreme delays that Haven has. Haven behaved in her usual way–she is very afraid of any medical environment, so it took her a while to come out of her shell. She eventually warmed up to the doctor, just a little. I answered a lot of questions, while the doctor played with Haven.

Although we will only get the results once all the testing has been done, she seemed to be leaning toward Reactive Attachment Disorder. Autism? Could still be. Selective Mutism? Probably not. I have done some research on RAD, but not a lot. I have no idea what that would mean for the future–but praise God, He does. She did say that RAD could be part of the cause of her being non-verbal.

Something else came up that we have never considered before–seizures! They are going to want an EEG done to see if that is an option. Haven ‘zones out’ often. She kind of just ‘disappears’ mentally for a few seconds, and then comes back again. She will frequently cry (no, literally sob) for an hour at a time, for absolutely no apparent reason. She actually did it today while in the doctors office. The doctor wondered if it could be due to coming out from a seizure. Her mouth is almost always partially open–which could be another sign of seizures. An EEG will show us.

The other thing that came up again (and I know will come up as we continue testing) is school. Oh my word–I have no idea what to do. I know that public school can offer Haven all the services she needs, but after our disastrous first attempt at putting her in school last December, I am reluctant. We are going to have to prayerfully consider what the best thing is for her. I realize that because she is 8 1/2 years old, she has to get some sort of formal schooling by law–but heck, how do you teach a non-verbal child who is developmentally around a 2 year old level? Starting third grade in the fall is just not even an option for her–she would be completely lost. Her first experience with school was so traumatic. God is going to have to show us the way in this, and I know He will.

Tomorrow we go back for more testing.

I have peace in my heart–God has been so amazing in leading and guiding us as we learn to parent Haven. I know He will continue to do so. I know He holds Haven’s future in the palm of His hand. I know He will equip us with everything we need as we help her learn and grow. 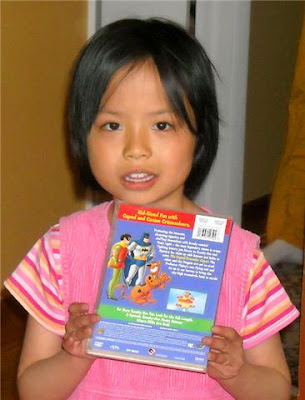